Study of Netflix Show about Suicide Leads to Additional Resources

Multinational survey finds teens report talking with parents about tough topics and apologizing to peers after viewing first season of 13 Reasons Why.

Each episode of the newly released second season of 13 Reasons Why starts with a warning from the actors that the show tackles tough topics like sexual assault, substance abuse and suicide.

“If you are struggling with these issues yourself, this series may not be right for you, or you may want to watch it with a trusted adult,” says Alisha Boe, who plays Jessica Davis.

“And if you ever feel that you need someone to talk with, reach out to a parent, a friend, a school counselor or an adult you trust,” adds Dylan Minnette, who plays Clay Jensen.

The warnings, and a downloadable discussion guide provided by Netflix at 13reasonswhy.info, come out of research recently conducted by Drew Cingel, an assistant professor of communication at UC Davis, with Ellen Wartella and Alexis Lauricella at Northwestern University in Evanston, Illinois.

Their study of more than 5,000 teens, young adults and parents in four regions of the world found that watching the first season of the fictional series prompted teen and parent conversations about bullying, suicide and mental health. But the vast majority of viewers wanted more access to informational resources.

The fictional series about a high school student named Hannah Baker who takes her own life, leaving behind audio cassette recordings that document the 13 reasons why she decided to end her life, launched globally on Netflix in March 2017. While there were many positive reviews, the series also received a great deal of criticism in response to its treatment of sensitive subjects.

The graphic nature of scenes depicting suicide and sexual assault sparked conversations worldwide about the appropriateness of the content for young viewers.

The second season, released May 18, revived those conversations with scenes that portray the sexual assault of a male student who later returns to school armed with guns. Disturbed viewers and parent groups have called for Netflix to cancel the series, but the show’s creators say they are trying to start a conversation about sexual violence against men in high school.

The study on the first season by Cingel and colleagues at Northwestern University’s Center on Media and Human Development found that the series did more than promote parent-child conversations about tough topics.

Nearly 80 percent of adolescent and young-adult viewers across all four regions reported that watching the show helped them understand their actions can have an impact on others; more than half of teen viewers reached out to apologize to someone for how they had treated them; and more than two-thirds were more motivated to help someone who was depressed, bullied or sexually assaulted.

“In a developmental time when adolescents tend to be focused on themselves, this show seems to have promoted this idea to talk about what other people are going through,” Cingel said. “It speaks to the power of media to model behavior, in this case positive behavior that [teens] can incorporate into their own lives.

“Many of the characters in the show missed their chance to be nice, or to help someone else,” he added. “These findings, coupled with others from these reports, indicate that adolescents noticed these missed opportunities, and sought to make a change in their own lives, through the way they acted towards others.”

The study, Exploring How Teens and Parents Responded to “13 Reasons Why,” which was commissioned by Netflix and approved by Northwestern University’s Institutional Review Board, surveyed adolescents and young adults, ages 13 to 22, and parents in the U.S., U.K., Brazil, Australia and New Zealand, to ascertain how audiences perceived, related to and were reportedly influenced by the popular Netflix series. 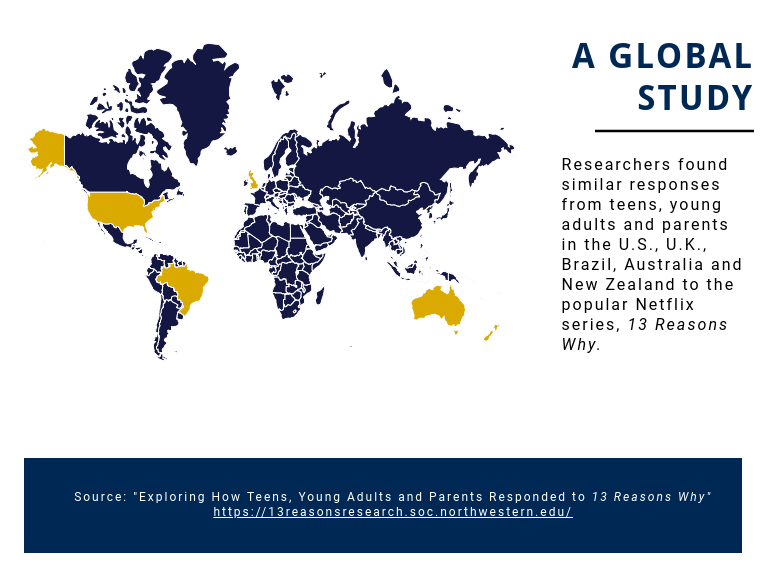 While many teens and young adults reported positive attitudes toward the show, adolescents suffering from high social anxiety tended to say that the sexual assault scenes were too intense.

“It is important that we consider those individuals who fall outside of the majority when viewing this type of program,” Cingel said. “But the results for the majority of teens and young adults are promising. These findings suggest that ‘tough topic’ programs like 13 Reasons Why may be able to help adolescents talk about these stressors in their lives.”

Cingel, who joined UC Davis in fall 2016 after earning his doctorate in media, technology and society at Northwestern, is a research collaborator at its Center on Media and Human Development, which studies the role of media and technology in children’s development. The center receives funding from the National Science Foundation as well as private funders and industry partners. Studies are independently designed and executed.