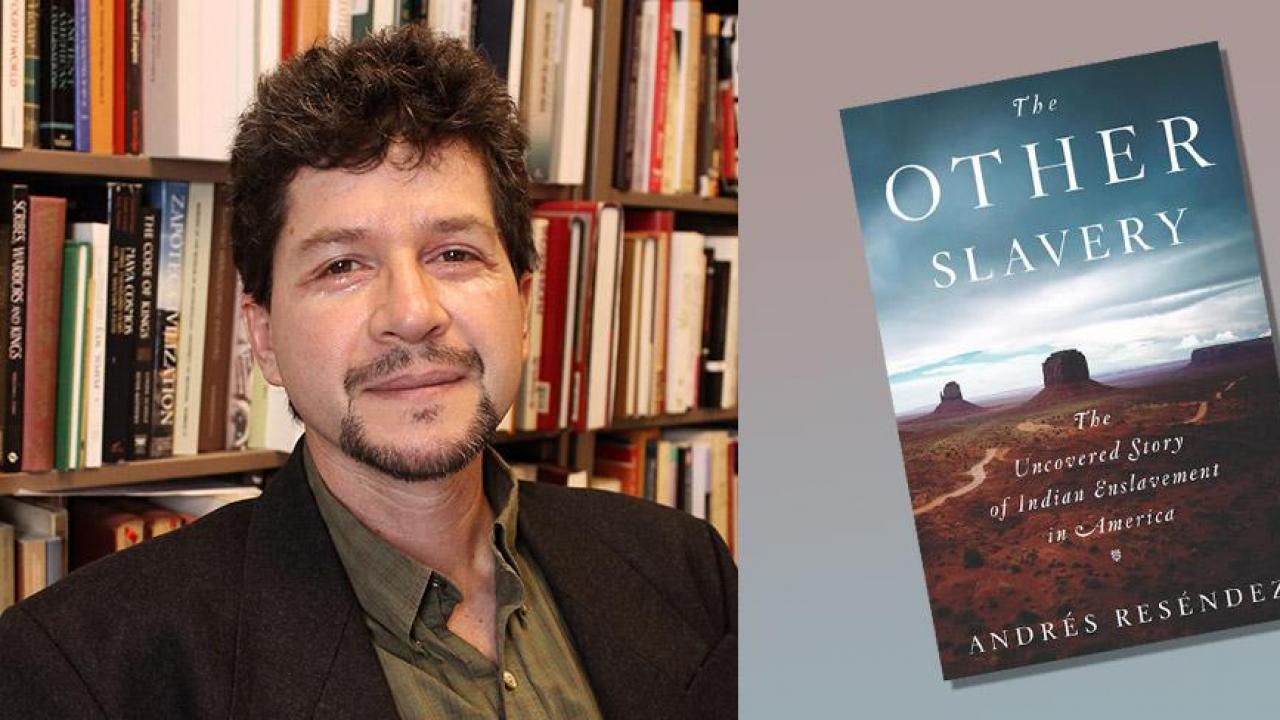 Prize is latest honor for history of Native American enslavement.

UC Davis professor of history Andrés Reséndez accepted a California Book Award on Monday, June 12, for The Other Slavery, the latest in a series of honors for his history of Native American enslavement.

The Commonwealth Club cited Reséndez’s “groundbreaking scholarship” in awarding him a gold medal in nonfiction in its 86th annual California Book Awards.

The Other Slavery, which tells the story of the enslavement of millions of Native Americans over four centuries, also won a 2017 Bancroft Prize and was named a 2016 National Book Award finalist.

Julia Flynn Siler, a journalist and author who was a juror in the nonfiction category, said the story of Native American enslavement had been largely untold before the publication of The Other Slavery.

“From their earliest encounters with the North American continent, conquistadors and missionaries kidnapped and enslaved native peoples, forcing them into harsh labors that helped build the new world,” Siler said at Monday’s award ceremony. “This native slavery continued under various guises for centuries.

“The practice of slave taking and trading among tribal peoples themselves has been obscured,” she said. “Understanding it requires to not only understand racial prejudice but even more generalized attitudes towards the value of other peoples’ lives.

"Andrés Reséndez has illuminated a vital dimension in the annals of American historical and moral knowledge.”

Giving voice to the enslaved

Reséndez said his book built on the insights of many other historians. “It is a humbling experience to be here,” he said. “The act of writing history may seem lonely, but it's always the result of a group effort.”

He dedicated his award to his family—children Samuel and Vera, his mother, a brother and his wife, economist Jaana Remes.

“All along when I was writing this book, I kept thinking about the literally millions of Native Americans who lived out their entire lives as slaves. Their subjugation was so complete that their condition has been largely erased from the historical record. An award like this makes their voices finally heard.”

Reséndez may be just the second UC Davis author to win in the nonfiction category. His former history department colleague Alan S. Taylor won a gold medal in 2001 for American Colonies.

Other faculty winners hailed from the English department. Winners of California Book Awards for poetry include: Celeste Turner Wright, for A Sense of Place, 1973; Karl Shapiro, for Adult Bookstore, 1976; Gary Snyder, Left Out in the Rain, 1986.

Snyder also shared awards with letterpress artist Tom Killion for notable contribution to publishing for The High Sierra of California, 2002 (silver), and in the Californiana category for California’s Wild Edge, 2015 (gold).

The Literature of California, Vol. 1: Native American Beginnings to 1945, edited by Jack Hicks, won silver for Californiana in 2000.