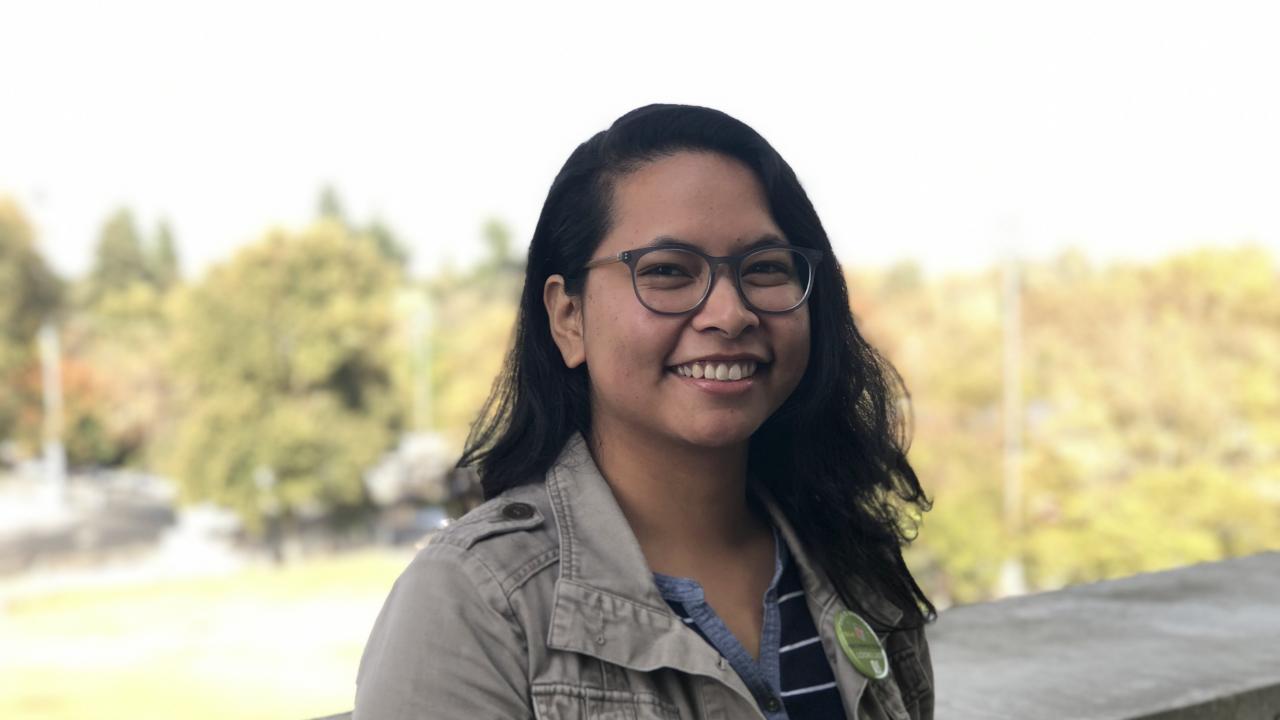 Pursuing Undergraduate Research Outside the Lab

Getting research experience as an undergraduate student doesn’t have to mean working in a laboratory. Instead of days spent transferring fluids from one tube to another, math major Tracy Camacho explored matroids, complex mathematical objects with many different uses.

Participating in research had practical benefits for Camacho, who turned the project into her senior thesis. There were also personal benefits, including winning an award at a national conference and meeting peers and potential mentors in mathematics.

Feeling at home in mathematics

Camacho’s research focused on a type of matroid known as unit interval positroids. These have a feature called recursion, which means the properties of an object in a sequence can be determined from those that came before, Camacho said. For the project, she investigated how recursion occurs in unit interval positroids and delved into mathematical proofs that describe building new objects from previous ones.

Check out some of Tracy Camacho’s activities and scholarships at UC Davis.

Association of Women in Mathematics

Thanks to a grant from the National Science Foundation’s Mathematical Sciences Collaborative Diversity Initiatives, Camacho presented her research in Hawaii at the 2019 Society for the Advancement of Chicanos/Hispanics and Native Americans in Science (SACNAS) National Diversity in STEM Conference. She was recognized with a SACNAS presentation award for her skillful description of matroid theory.

The trip to SACNAS also provided Camacho with opportunities to share experiences with scientists from similar backgrounds. Because of these new connections, Camacho said she is now considering earning a doctorate in math.

“Before SACNAS, I didn’t think I would try for a Ph.D.,” Camacho said. “Now, I feel like it’s possible.”

Camacho said she also found a supportive community at UC Davis through its McNair Scholars Program. The program encourages students from groups often underrepresented in graduate programs to pursue doctoral degrees. Each year, up to 20 UC Davis undergraduates and incoming transfer students are selected to participate. “Because of McNair, I had an instant community here,” Camacho said. “I have a group of people who are going through the same struggles and who I can lean on.”

Finding her passion in math was a long journey for Camacho. Following her family’s immigration to the U.S. in 2007, Camacho worked in a dental office and originally pursued training in that field. She fit in community college classes while juggling as many as three jobs at once to help support her family.

After seven years, when Camacho had the chance to enroll in Solano Community College full-time, she decided to switch careers. “If I was going to go to school full-time, I wanted to do something I enjoyed,” she said. That turned out to be teaching math.

At Solano, one of Camacho’s instructors hired her to tutor her fellow students in math. “That was the turning point for me,” Camacho said. “I enjoyed helping other students with math, and that’s when I started thinking I wanted to be a math teacher.” After earning her math degree — with an education minor — at UC Davis, Camacho is now applying to graduate programs and plans to teach math at the community college level, she said.