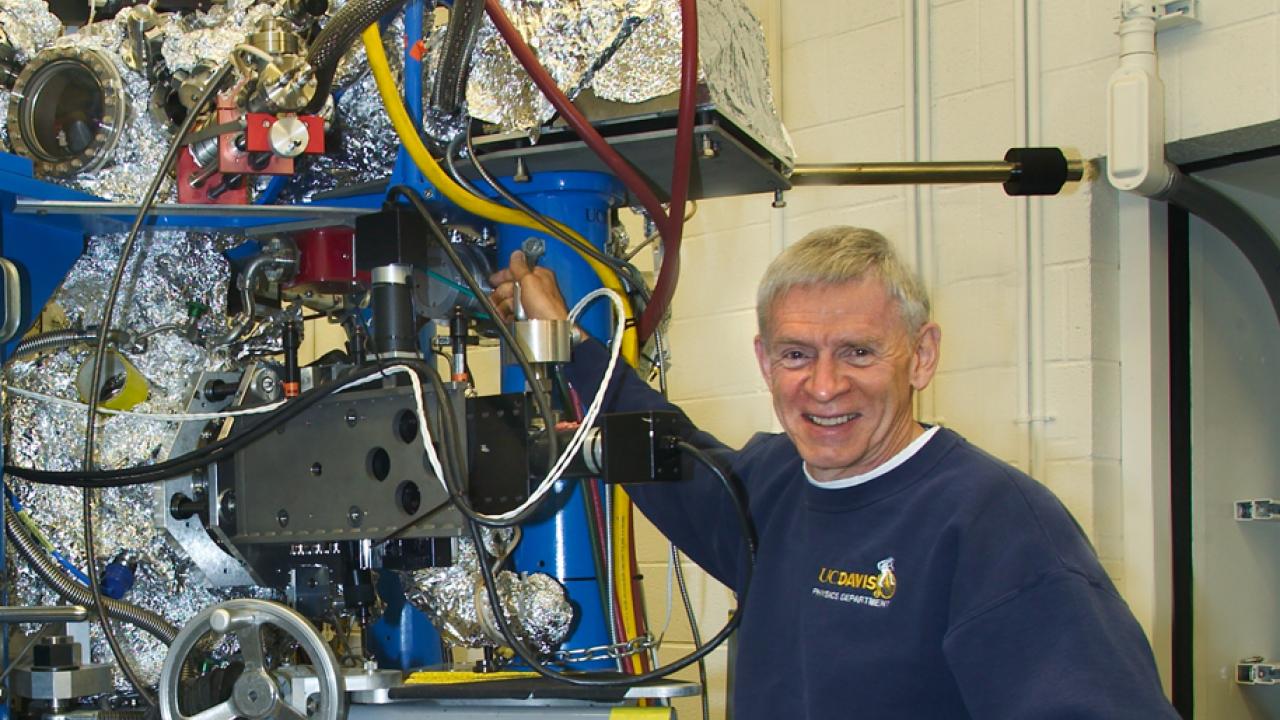 Charles “Chuck” Fadley, a pioneer in X-ray photoelectron spectroscopy and a distinguished professor emeritus of physics at UC Davis, died at his home in Berkeley on Aug. 1. He was 77.

X-ray photoelectron spectroscopy (XPS) is a technique that uses very bright X-rays to measure the chemical and electrical states of elements in a material, and is particularly useful for studying surfaces and interfaces. As a graduate student at UC Berkeley in the 1960s, Fadley designed and built the X-ray tube for the first experimental X-ray photoelectron spectrometer in the United States.

At the border between chemistry and physics

Fadley developed many new uses for X-ray photoelectron spectroscopy, including angle-resolved XPS for surface depth profiling, photoelectron diffraction as a probe of atomic structure and magnetic order, and the use of soft X-ray standing waves to study buried interfaces. His most recent research combined photoelectron, X-ray emission, and X-ray absorption spectroscopies in studying surfaces and buried interfaces of magnetic materials, especially very thin "nanolayers" buried below surfaces. Understanding such nanomaterials is important for developing next-generation electronics for computers, memory storage devices and other applications of nanotechnology.

"Chuck was truly a giant in the world of photoemission and surface science. His impact on the field will long be felt not only through his scientific discoveries but also through the many students and postdocs who worked with him and have continued to work in the field themselves,” said Shirley Chiang, UC Davis professor of physics. “For decades, he came regularly to Davis to teach, meet with students, and serve on committees here, while also supervising his research group at the Advanced Light Source at Lawrence Berkeley National Laboratory. He will be very much missed by his friends and colleagues in the department."

Fadley received many national and international honors for his work, including fellowships in the American Physical Society, the American Vacuum Society, the Institute of Physics, the American Association for the Advancement of Science, the Uppsala University Royal Society of Science, and the Surface Science Society of Japan. He is also a foreign member of the Russian Academy of Natural Sciences. His awards include an Alfred P. Sloan Fellowship, the Medard Welch Award, the Helmholtz-Humboldt Award, and the David A. Shirley Award.

Throughout his research career, Fadley mentored scores of students at all levels, and guided nearly 40 advisees to their doctoral degrees.

"Chuck took great pride in his students and their successes," said Rena Zieve, physics department chair at UC Davis. "He remained active in research until the last few weeks of his life, and made sure that his current students would be taken care of after his passing. He will be remembered and missed by students and colleagues alike."

Memorial gifts may be made to UC Davis in support of the Katherine Fadley Pusateri Memorial Fund in Physics.