In the year leading up to the 2016 election, assistant professor of design Jiayi Young began collecting Twitter data that she turned in to an artwork she describes as “social media as cyborg.”

“I wanted to come up with ways to visualize the data beyond dots and lines on screens — something non-conventional that stuck with the viewer and bridges big data with human cognition,” she said. “I could feel very viscerally in my body what was happening and wanted to translate it into a physical manifestation. There was a sense of urgency I felt — like the urgency of a medical emergency.”

The goal is to accurately represent 6.5 million Twitter user activities and 620,000 election related tweets and identify the most influential social media robots and reveal their powerful influence on a global scale. 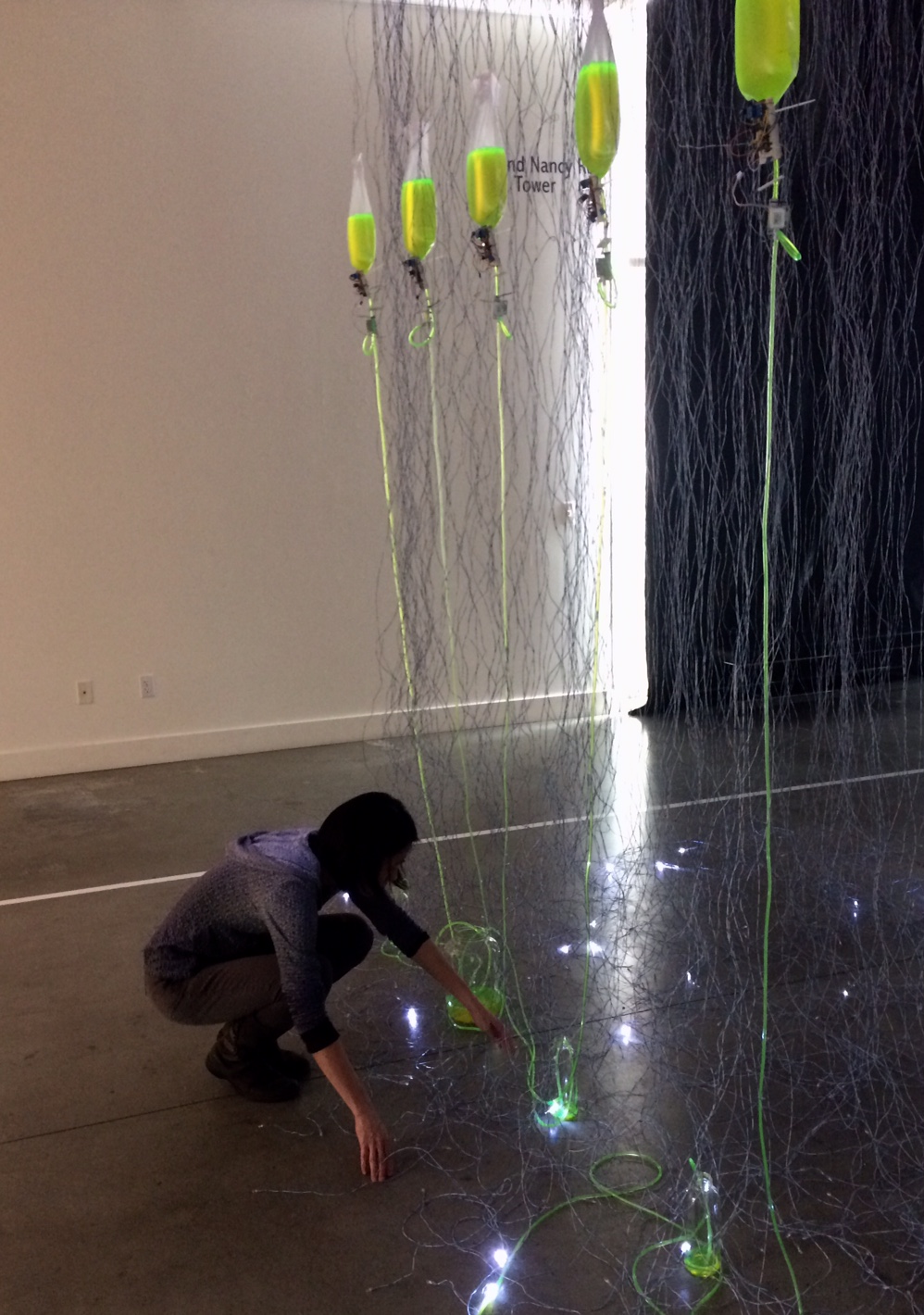 The most recent iteration of the project “What Does the Bot Say to the Human?" was made of IV bags filled with a glowing green solution, a tangle of 300 tiny wires with lights at each end and 60 speakers. The system starts with the lights (representing human twitter activity) calmly fading in and out at the rate of normal human breathing. Then the IV bags start to drip liquid into the system at the rate of robotic tweets were being generated. As the human accounts respond to the robotic tweets, the lights change to strobe/flicker and sounds intensify to reflect the rate at which human accounts retweet, reply, or follow bot tweets. After five minutes the system goes into a “seizure” and shuts down.

The first iteration — a literal rain of tweets with IV bags dripping water directly on viewers — was done in the summer of 2016 on the heels of the Republican National Convention.

It reflected the spike in social media mentions connected to Donald Trump. Tweets, many generated by social media robots, were tracked by hashtags such as #makeamericagreat, #nevertrump, #realDonaldTrump, and “likes,” “retweets,” timestamps and user profiles such as geographic locations were also used.

Young collaborated with Shuguang (Robert) Cui, Child Family Endowed Chair and Professor in the UC Davis Department of Electrical and Computer Engineering to amass and analyze the data.

Young plans to continue collecting data and evolving the project during the years leading to the 2020 election. “It will most likely take a different physical form,” she said. “I’d like to shift to a more hopeful outlook and construct a provocation that propels positive social change.”

“Presently Untitled” isn’t the only data and technology-driven project for Young, who came to UC Davis two years ago. In September, she will create “Transduction” a public participatory performance/installation for the Ars Electronica Festival in Austria. It will translate movements of those attending into pixels and sounds in real time to provoke discoveries about patterns in relationship between people and the urban environment.

Her “Message in the Sky” is a crowd-sourced, participatory public art project, that has been mounted in Dubai and at the Joshua Tree National Monument. It allows participants to cast their hopes and dreams into the sky literally and symbolically.