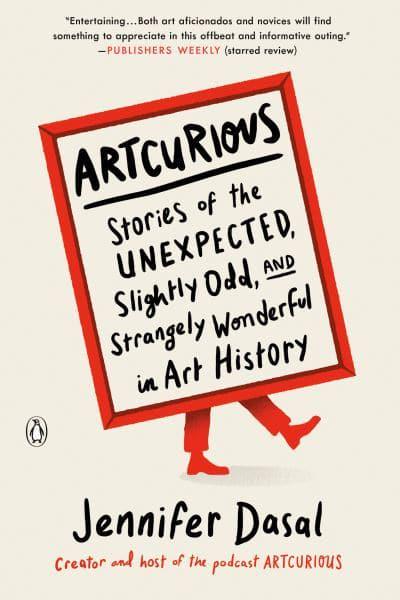 Since shortly after its launch four years ago, Jennifer Dasal’s ArtCurious podcast has been a hit, garnering kudos from art historians and nods from O: The Oprah Magazine, Salon and National Public Radio. Now Dasal (B.A., art history, ’02) has taken some of those podcast stories and added many more for her book ArtCurious: Stories of the Unexpected, Slightly Odd, and Strangely Wonderful in Art History (Penguin, September 2020).

The 12 chapters are about well-known artists, including Vincent Van Gogh and Andy Warhol, and others unknown to most, but all give insights into little-known, misunderstood or recently discovered aspects of the artists’ lives and art. Did Van Gogh die by murder rather than suicide? Does a British artist’s work reveal that he was Jack the Ripper? Were the first fully abstract paintings created by two female artists? How do you decide if a painting is by Leonardo Da Vinci?

Like her podcast, the book has a breezy and personal style with many asides, puns and self-deprecating notes. There are several “nerd alerts.”

“I didn’t want it to feel lectury,” Dasal said. “I wanted it to be fun, something you’d want to read. I put a lot of myself in there.”

Still the book, which has sold about 10,000 copies, is thoroughly researched, citing many scholars’ works, and has a 16-page bibliography broken down by chapter and a 12-page index.

From Bored to Bowled Over

Dasal, curator of modern and contemporary art at the North Carolina Museum of Art, loves telling stories about art and artists. Sharing these stories is a way to engage those who don’t like, understand or care about art. She gets where they are coming from.

“I completely understand — I was that person,” said Dasal, who is from Sacramento. “I grew up thinking art was really boring.”

Dasal’s attitude about art started changing when a UC Davis academic advisor had her enroll in an art history class. She needed a humanities class and it was the only one that had space. She wasn’t happy about it.

During that class in the College of Letters and Science's Department of Art and Art History, she learned the stories behind art and those stories grabbed her. During her second year, she didn’t take any art history classes and missed it so much that the next year she became an art history major. She was one of the founders of the campus art history club and worked at the Nelson Gallery, the main UC Davis art gallery at the time, giving her a taste of what working in a museum might be like. After graduate studies at the University of Notre Dame and Pennsylvania State University, she landed at the North Carolina museum in 2008.

While on a work trip to Paris, Dasal visited the Louvre Museum. Gazing at the Mona Lisa by Leonardo da Vinci, she was reminded of something UC Davis art history professor Dianne Macleod had casually mentioned in a class: the Mona Lisa in the Louvre is a copy. That recollection launched ArtCurious with the Mona Lisa’s authenticity as the topic of the first episode. She expanded it for her book.

The book starts with a story Dasal has long wanted to tell, but that hadn’t made it onto the podcast. When she was about 13, her family attended a Claude Monet exhibition in San Francisco. Her impression? “Claude Monet, the most boring painter of my childhood.”

The adult art historian has a very different view, titling the opening chapter “Your Mom’s Favorite Painter Was a Badass: Claude Monet and the Subversive Impressionists.”

“Most people think of (impressionist) art as just being pretty and decorative,” Dasal said.

She writes about how Monet, Pierre-Auguste Renoir and others broke nearly all the rules of art in France, the capital of the art world in the late 19th century, and were ridiculed and rejected for it. A few decades later, they were the most respected and popular artists, a status they continue to maintain. Ironically many people now see them as old-fashioned, safe and — the worst thing ever — your mom’s favorites.

Another group of artists, the American abstract expressionists of the ‘40s and ‘50s, were considered radical by many, but certain U.S. government employees thought their art would be a good tool for fighting communism. Dasal pulls back that curtain in the chapter “Secrets and Lines: The CIA/AbEx Connection.”

Dasal is constantly discovering art stories that surprise her or that challenge her artistic assumptions.

Like most people, she viewed Norman Rockwell, best-known for his Saturday Evening Post covers, as an illustrator of a sugar-coated, nostalgic version of the United States. Then she encountered his work depicting the killing of civil rights workers.

“I saw his 1965 painting Murder in Mississippi and never took Norman Rockwell for granted again,” she writes.

The podcast and book are as much about her own journey as they are a guide for others.

“I am indeed learning along the way,” she said.