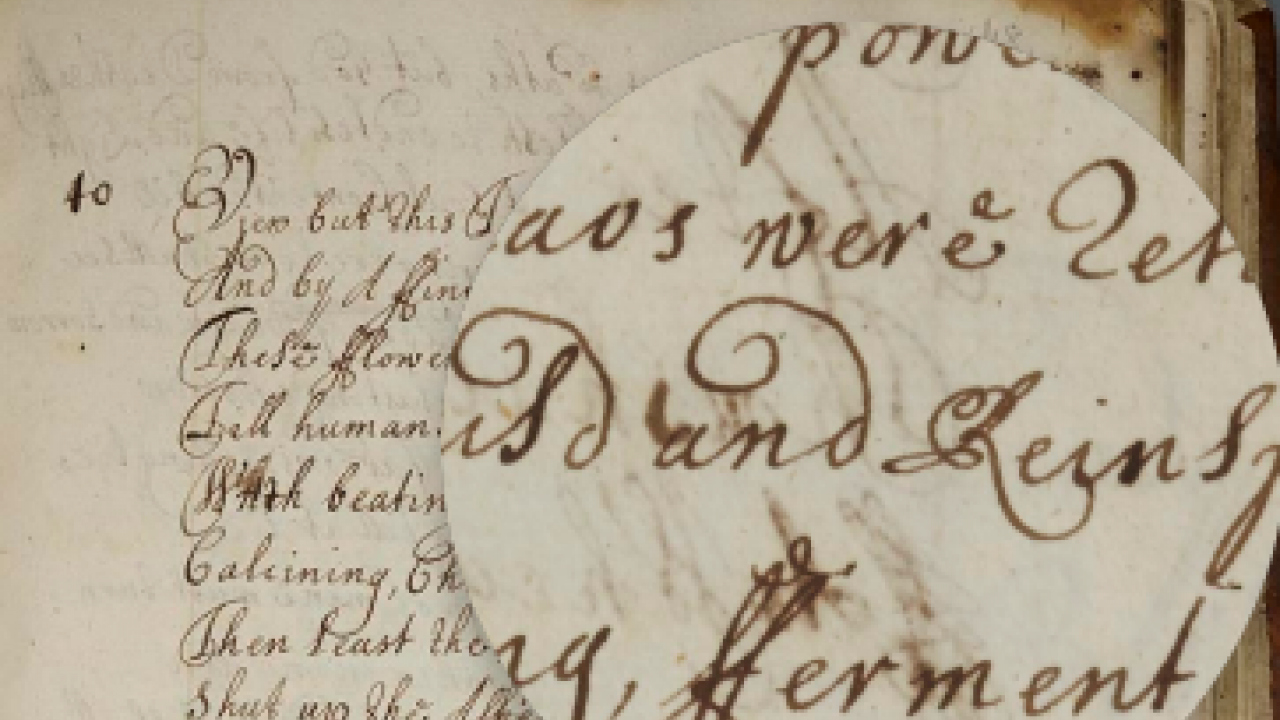 Frances Dolan spent much of last year in the company of Hester Pulter, a little-known 17th-century British writer. Dolan, distinguished professor of English in the UC Davis College of Letters and Science, has done extensive research and writing for The Pulter Project: Poet in the Making, a “digital collaboration” launched in November.

On the site, one can find multiple versions of poems by a female writer who was pushing the boundaries of literary conventions. The project takes a more open-ended approach to literary study than is traditional. Rather than offering a “definitive edition” of a writer’s work, it cultivates various editions simultaneously. It is also aimed at both scholars and laypersons.

“The collaborative and inventive spirit has made it remarkable as an ongoing process,” said Dolan, who is an expert in Shakespeare and his contemporaries. “There’s a sense of delight in the scholarship ­­— it has been enormously fun and liberating.”

Among Dolan’s contributions are examinations of poems about the death of a child; illness and aging; flowers and farming; and the execution of two British soldiers. Dolan has provided insights into a dozen poems, two in collaboration with UC Davis English doctoral student Samantha Snively, and is working on a dozen more.

One particular area of interest to Dolan is the literary “blazon,” a device usually employed to describe the physical attributes of a woman. Pulter uses it to express grief over her daughter’s death and to assess the effects of aging on her own body.

“This challenges every assumption we have about how the blazon works,” Dolan said. “It has made me look at writing I was familiar with in a whole new light.”

Inside the Pulter Project

The Pulter Project offers “freely-accessible, deliberately-distinguished editorial visions of Pulter’s poems.” It presents multiple representations and readings of the poems to explore the complexity of Pulter’s poetics. It also serves as a model for scholarly editing in the digital age. On the site, one can toggle between scans of the manuscript, basic and annotated editions of poems, and explanatory notes.

Frances Dolan has been contributing to the project since its inception three years ago after meeting with its founders Wendy Wall, an English professor at Northwestern University, and Leah Knight, an associate professor of English at Brock University. She is also on the project advisory board.

Samantha Snively recently wrote about the project for The Conversation.

Pulter’s writing about the natural world and science also intersects with Dolan’s latest research into food and farming in literature. The “dunghill,” a pile of manure, shows up frequently in the poems, and at the 2019 Shakespeare Association of America conference Dolan will give a talk titled “Hester Pulter’s Dunghill Poetics.”

Born around 1605 into a well-connected, wealthy family, Pulter lived a fairly isolated life far from London and was mother of 15 children. But her seclusion, and the fact that she wrote mainly for herself, may have freed her to write the way she did about topics few women of the time did, such as politics, death and science.

“I wouldn’t have been interested if the poetry wasn’t so provocative,” Dolan said. “The frankness of her writing is amazing.”
Pioneering though Pulter may have been, her manuscript of 120 poems and an unfinished novel was lost for about 300 years after her death in 1678. The Leeds University library acquired it in 1975, but there it gathered dust for another two decades until rediscovered in 1996.

“The relatively recent ‘discovery’ of Pulter and the extraordinary interest of the poetry offered us a unique opportunity,” Dolan said.