Unlike the enslavement of Africans, Native American slavery was historically illegal across much of North America. Yet, as UC Davis historian Andrés Reséndez explained to a colloquium held October 12, 2016, in honor of Indigenous Peoples’ Day, it was practiced for centuries—sometimes by Indians themselves.

Reséndez began by framing the enslavement of Native Americans against popular historical perceptions of slavery in North America—perceptions that typically focus on African slavery.

The author of The Other Slavery: The Uncovered Story of Indian Enslavement in America, he also deconstructed the standard discourse of “perpetrators and victims,” as well as the prevalence of immoral political judgment within that discourse.

Urging scholars to think about the detailed history of slavery—how the practice was organized and institutionalized in many societies throughout history—Reséndez sought to shift the focus away from Eurocentrism and white supremacy as paradigms responsible for the history of modern slavery. 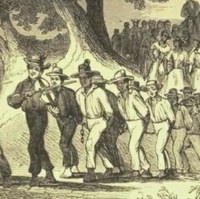 America. While the enslavement of Africans, which primarily targeted men, was legal, Native American slavery was illegal, and mainly involved women and children. For Africans, therefore, it was almost impossible to escape lawful bondage, while for Native Americans the lack of legal structure did allow for some minor mobility.

Reséndez pointed out that, prior to white supremacy, exploitative practices existed within and between Native American cultures. For example, Aztecs and Mayans both made ritual human sacrifices, and the so-called “mourning wars” of the Iroquois led to many acts of brutality. Even later, in the 18th and 19th centuries, Comanche families sometimes kept one or two captives, typically regarded as “secondary wives.”

Later, Reséndez shifted focus to the role of the English, the French, the Dutch, the Portuguese, and the Spanish. Spain, he said, was to Native American slavery what England and Portugal were to African slavery. He also described how slavers calculated the value of each slave using categories like age, sex, beauty and usefulness. During the Q&A, there was significant discussion—some quite heated—of the definition of slavery, methods of research, and the identity history of slaves.

Reséndez concluded by reflecting on the significance of researching a topic like slavery. Contemporary exploitation—sometimes termed “new slavery”—is by no means a “new” phenomenon, he said. He reminded the audience that rigorous intellectual investigation of slavery requires serious focus on its complex historical genealogy.

His book The Other Slavery is a finalist for the 2016 National Book Award.

This article originally appeared on the website of the UC Davis Institute for Social Sciences.