French Professor Has Blues on Her Mind 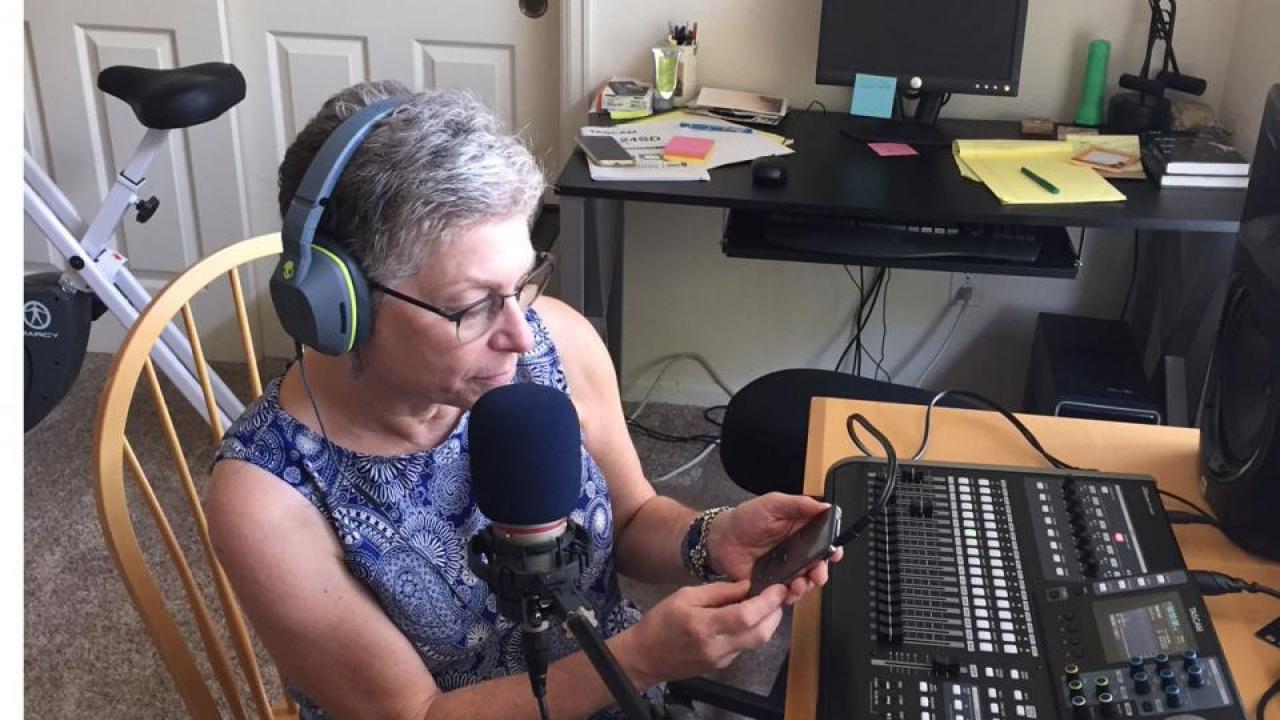 French Professor Julia Simon had been teaching, singing and writing about the blues for a number of years when both a colleague and her adult daughter recently suggested she could do something more with her blues knowledge, her mixing board, and her vast collection of blues music stored on an iPod.

So, earlier this summer, following this suggestion, the blues singer and bass player started a podcast, “Blues on My Mind.” The podcast is in its seventh episode.

French culture and the blues all came together this way. In 2013, she had published her book on 18th-century philosopher, musician, Jean-Jacques Rousseau, Rousseau Among the Moderns. In her conclusion to the book, a chapter entitled “Rousseau Sings the Blues,” Simon ties Rousseau’s own political philosophy and views about music in Europe at that time to the blues and music’s power of redemption in modern U.S. history.

The blues, Simon explains in her book, might move an audience to “understand the pain and humiliation of discrimination and segregation, and it might lead to greater social and political justice.” This, she reasoned, was similar to some of Rousseau’s thinking about how music fosters community. Working on Rousseau, Diderot, Montesquieu, and others of the period of Enlightenment, she elaborates, “enables me to question what I consider to be fundamental problems, not only of 18th-century France, but of contemporary society.”

So, ever since the Rousseau book, she is all about the blues.

Professor Julia Simon and her acoustic-electric upright bass, which is displayed prominently in her living room.

She teaches “Humanities 002B, a Cultural History of the Blues,” a class that combines cultural history with music appreciation. Some of the playlist for the course and her podcast are taken from her more recent 2017 book: Time in the Blues.

In a format that lasts about 20 minutes, she introduces a song, such as B.B. King’s “Beautician Blues,” (in this podcast), plays a bit of it, then talks a little more about its meaning and place in history. Then she plays more of the song.

“I had all the equipment, I have the songs, I can record and mix. I decided: Let’s see what happens.”

She records the podcast in her home office in Davis, which is decorated with framed vinyl records, “from the '20s, mostly.” She shares the house with her husband, Charles Oriel, who teaches Spanish at UC Davis and who plays guitar in their band, and their two dogs. Also residing at the house are recording and sound equipment, 15 guitars and three basses, mostly in cases lined up and ready to go — but for an acoustic guitar and an uncommon acoustic-electric upright bass displayed on stands in their living room. Oh, and there’s a flute there “somewhere.” As a child, the first instrument Simon learned to play was a flute.

Simon and her husband play in a band, together with others, in Julie and the Jukes (she is Julie, because “no one ever gets ‘Julia’”) as well as their acoustic duo Chicken & Dumpling.

She seeks to impart to students, readers of her books, and now listeners to her podcast, the power and meaning behind blues music that was born in the rural south between the 1880s and the 1920s.

She is teaching them a little bit of culture. A lot about history. And, a fair amount of music appreciation.

“I teach people what to listen for.”

Catch her podcast each week here.